The Road to Whakarae is part of the new Loading Docs initiative established by the New Zealand Film Commission and NZ On Air. Filmmakers Tim Worrall and Aaron Smart saw it as a perfect opportunity to create a small project that celebrated the lighthearted and joyful aspects of being Ngai Tūhoe. It was also an opportunity to bring together and train a film crew from Te Waimana in preparation for future projects.

The lyrics of the song “Te Rori ki Whakarae, e” tell of how the winding, dusty road is a special part of the mana of the Waimana Valley. The same could be said of the various whānau and hapū in the valley who have retained much of what it is to live in a uniquely Tūhoe way. This is the spirit the filmmakers hope to share in the film. 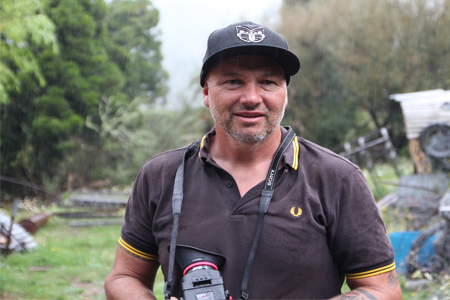 I am from Ngai Tūhoe and am currently a chairman of Tauanui Marae. I have been an independent artist all my adult life working in ta moko, graphics, carving, design and painting. In the last ten years I have concentrated on film and television and have written and directed drama, comedy and documentaries for all our major broadcasting networks. I currently have a dramatic short film in pre-production and a feature film script in development. My dream is to continue making films with and about my tribe that are uplifting and entertaining. I am married to Taria Tahana with whom I have two sons – Tiki and Tanu. 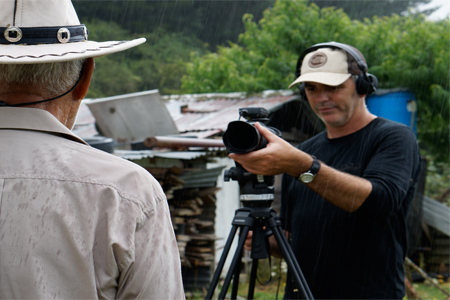 Hi, I’m an independent video producer, director, camera operator and editor. Since gaining my diploma in film production I have worked as an editor for a top rating television show and have produced a variety of short films and promos for corporate clients and charity organisations. My passion is for short documentary and I have had success in various International Film Festivals. My goal is to make films that inspire, entertain and hopefully change audience perceptions. I run Smart As Productions based in the sunny Bay of Plenty where I lives with his wife Jody and our two children Nirai and Lola.