This year the initiative celebrates its fifth year of producing 3-minute kiwi documentaries that screen online, on demand and on the big screen. The team at LOADING DOCS has been through a rigorous selection process to choose these films by some of Aotearoa’s most exciting documentary talent, maintaining their commitment to fostering and promoting New Zealand filmmakers.

Last year, LOADING DOCS was awarded the NZ On Air Best Web Series at the 2017 TV Awards confirming the significant impact the initiative has made on audiences and the filmmaking industry, which has prompted the theme for the 2018 films to be just that: impact. As in previous years, the filmmakers were asked to submit a unique concept that relates to the theme, and as always the broad interpretations of that theme mean that the films are diverse, creative, inspiring and ready to make an impact.

With support from principal funder NZ On Air, along with the New Zealand Film Commission and Te Māngai Pāho, LOADING DOCS will help fund, create and distribute the ten digital shorts. Additionally, the filmmakers must now pitch their films on crowdfunding platform BOOSTED, providing them with a vital opportunity to connect with their potential audiences while raising the extra funds they will need to complete the film to the highest level. The BOOSTED campaigns launch on May 24th and the teams will have one month to reach or exceed their goal of $2000 at which point they will receive an additional $4450 from LOADING DOCS plus a post-production package from Department of Post.

The founders of LOADING DOCS, Julia Parnell and Anna Jackson, are proud to be embarking on this project of professional development once again and are excited to see these powerful and thought provoking short films come together. “Every year we are completely blown away by how these talented documentarians come up with original, brave and captivating ideas and turn them into these perfectly formed little cinematic gems” says Parnell. “The films from previous years have exceeded 5.1 million views so the filmmakers really do have an opportunity here to have their film make an impact and be seen all over the world.”

The lone resident of a sinking island watches in despair as the effects of climate change slowly encroach on his island paradise. But what can one person do to counteract a global crisis? How can he stop the waves?

Loading Docs is a unique New Zealand documentary initiative established in 2014 that aims to captivate and inspire audiences as well as develop and promote New Zealand filmmaking talent. Every year Loading Docs selects ten thought provoking short documentary proposals, which are then supported from development through to distribution. Loading Docs filmmakers expand their skills in a range of areas including story development, outreach, publicity and marketing and distribution. Since its inception Loading Docs has achieved over 5.1 million views across the collection and is supported by TVNZ OnDemand, Air New Zealand in-flight and hosted on such high profile websites as National Geographic, The Atlantic, The Daily Mail, Huffington Post, Upworthy, The Guardian, Great Big Story and Short of the Week and featured in festivals such as The New Zealand Film Festival, Melbourne Film Festival, SXSW and Telluride Mountain Film Festival to name but a few. Loading Docs has significantly increased the value and impact of New Zealand documentary series winning NZ On Air Best Web Series in 2017 at the New Zealand Television Awards.

and made with the support of The New Zealand Film Commission and Te Māngai Pāho.

High fives and victory laps awarded to 5 of the Loading Docs teams who have achieved their Boosted targets in crowdfunding before surpassing the 2 week mark. Well done to Blood Sugar, The Impeccable Larry Woods, Same But Different, Imagine the World is Ending and How Mr and Mrs Gock Saved the Kumara.

There are still five short docos yet to achieve their goal $2000 – you can see their progress and perhaps flick a few dollars their way here. 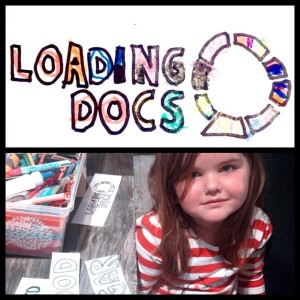 Here is Dahlia from Blood Sugar and her Loading Docs logo redesign! Thanks Dahlia. Great work.

On Tuesday 23rd February, 10 incredible new Loading Docs projects will launch their crowdfunding campaigns. It is a nerve wracking time for all ten teams as they embark on their mission to raise $2000 in one month in order to unlock access to match funding and begin their Loading Docs journey. They will then create 10 unique 3-minute documentaries that delight, engage and change the way that New Zealanders see exceptional real life local stories.

These 10 new films come hot on the heels of an impressive milestone for the Loading Docs brand, whose previous documentary shorts have cumulatively hit a million views across a variety of platforms; Online, OnDemand and on the big screen.

The 2016 Loading Docs shorts will create the opportunity to experience change in many different ways. Some films share personal stories of dramatic change, others address major social, political and environmental changes, and all have the potential to change the way viewers think and feel.

For the third year running the Loading Docs initiative will fund, create and distribute ten local 3- minute documentaries online, with support from NZ On Air and The New Zealand Film Commission. The documentary makers each need to raise $2000 via crowd funding. Once that target is met the Loading Docs fund contributes $4000 worth of production funds plus a post- production package at Toybox and Sale Street Studios. Each Loading Docs project also receives ongoing mentoring and support throughout production.

The documentaries are then created and released in July. “With online marketing and distribution ruling modern media, crowdfunding is an integral starting point for the Loading Docs teams, providing an opportunity for the filmmakers to find an audience for their work early in the creative process. This way the core audience is invested in the subject matter, the process and ultimately the stories and filmmakers themselves” says Executive Producer Julia Parnell.

Loading Docs has once again partnered with arts funding website Boosted and the ten campaigns will run for one month, ending on the 24th March. Auckland Boosted Ambassador, Dominic Hoey has this to say about working with Loading Docs this year “At Boosted we’re all really excited to get behind Loading Docs for another year, and help some of the country’s most promising film makers bring their ideas to life.”

The initiative’s executive producers Anna Jackson and Julia Parnell are thrilled with the high calibre of this year’s shorts and hope the public will also be inspired to get behind the incredible talent and the compelling local stories and give them the Boost they need to get their documentaries made.