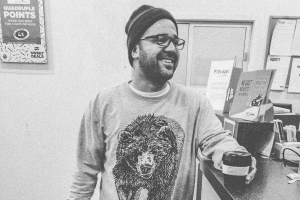 Robert is of Ngāti Kuki Airani (Rarotonga & Atiu), Te Arawa and Ngāti Awa heritage; he lives and works in Auckland, Aotearoa New Zealand.  Robert was schooled in Rotorua, Wellington and Rarotonga.  He is a video artist, writer, film-maker and painter, his work has been shown in New Zealand, the Cook Islands, Australia, France and Canada.

The most recent of Robert’s short films’, ‘Aka’ōu: Tātatau in the Cook Islands, was filmed entirely on location. Working alongside his family and friends, Robert’s focus was on the art of tātatau and the relationship between the teacher and student, where knowledge is passed down through a long and committed apprenticeship.

For Robert, the interest in the art of tatau began when he assisted or ‘stretched’ for his late father’s, Ian George, tatau from Croc Coulter. Robert was drawn to telling a story about tatau in Rarotonga that embraced the beauty of traditional knowledge, like the use of hand made tools and apprenticeships. His new short film focuses on the dedicated work that Croc and his wife, Ngāti Kuki Airani contemporary artist Ani O’Neill, are doing in Rarotonga, which is of vast significance both creatively and culturally to the Cook Islands.

Last year Robert and co-producer Lucy Cole pitched their idea of a Cook Islands Māori film-maker capturing the work of the Croc, an expat local practicing tātatau in the Cook Islands, to the Loading Docs team. Their idea, ‘Aka’ōu, was selected as one of the ten successful projects. They then had to develop the story, crowd-fund to raise money to make the film, and then travel to the Cook Islands to film.

Now in it’s third year, the Loading Docs collection of ten 3-minute short films is carefully curated by Loading Docs co-founder and Executive Producer Julia Parnell and is funded by NZ on Air and the New Zealand Film Commission.

This weekend, the ‘Aka’ōu film-makers will hold an event at Mirage Gallery, Sunday 14 August 2016 from 3 – 5pm. They will screen their short film and hold a discussion around the making of the film with their audience. Mirage Gallery, run by Pouarii Tanner(Kuki Airani) has become an unofficial gallery for the Cook Islanders exhibiting work, from senior master artist Mike Tavioni and his wife Awhitia Tavioni and Ani O’Neill.

Robert is a Cook Islands film maker, living and working in Auckland, New Zealand. Beginning his creative journey as a painter he has worked in and around the film and television industry for over fifteen years.

Robert also had his recent short film, Smiths Ave, preview at the Wairoa Māori Film Festival which then received the prize of Emerging Māori Director. The short film then went on to premiere in the New Zealand International Film Festival in the Ngā Whanaunga Māori Pasifika Shorts Programme.

Director of the Pollywood and the Co-curator of the NZIFF Ngā Whanaunga Māori Pasifika Shorts Programme, Craig Fasi described Smiths Ave thus, “The soundscape takes you back in time and thought to marry you to an idea; basketball is clarity.”

via The Big Idea