After a brush with death, she was reborn a warrior. Using hunting as therapy, she must overcome her past to lead a self-sustained sisterhood.

Pania Tepaiho-Marsh understands the anxiety for single parents to put kai on the table. Reinventing herself to help other wahine escape the same life of welfare and abuse, she enriches them with hunting skills to live off the land. However, with the feeling they’re ‘destined to be nothing’, can Pania help them harness a fear of the unknown to build a revolution? 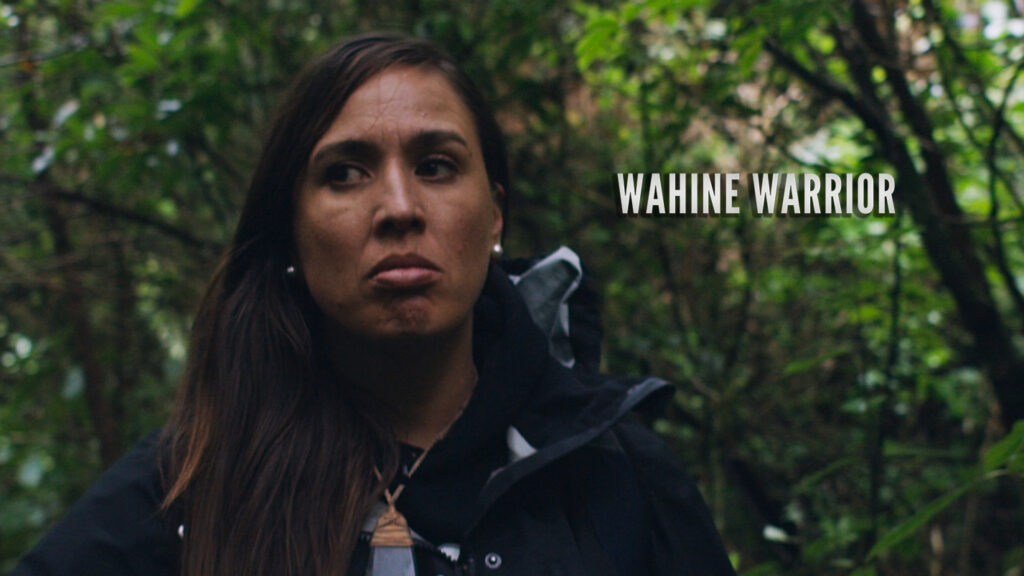 The complete Loading Docs season 7 will be available on all Loading Docs platforms and TVNZ OnDemand from August 20th. The award-winning short documentary initiative is this year unified by the theme of Revolution. 2020 is a turning point for humanity, challenging us to rethink the way we live, work and engage. It’s time for a revolution.

Funded by NZ On Air and made with the support of the New Zealand Film Commission and Te Māngai Pāho.

A science superhero with pink hair wages war on COVID-19 to convince an entire nation to lockdown.

With time running out to fight the oncoming pandemic, an unconventional expert delivers vital information to a panicked public. Go behind-the-scenes as Dr Siouxsie Wiles faces a growing media storm from the confines of her family home. Siouxsie & the Virus is a unique insight into one woman’s countdown to a defining moment in New Zealand history.

The complete Loading Docs season 7 will be available on TVNZ OnDemand and all Loading Docs platforms from late August. The award-winning short documentary initiative is this year unified by the theme of Revolution. 2020 is a turning point for humanity, challenging us to rethink the way we live, work and engage. It’s time for a revolution.

Funded by NZ On Air and made with the support of the New Zealand Film Commission and Te Māngai Pāho.

Loading Docs kicks off 2020 with the crowdfunding campaigns for eight new short documentaries to be made by eight female filmmaking teams.

United under the theme of Revolution, the award-winning Loading Docs invites audiences to support a new season by getting behind the Boosted crowdfunding campaign. Eighteen female directors and producers will create stories about New Zealand’s hot topics and revolutionary people.

The filmmaking teams must first raise $2,500 on homegrown website Boosted.co.nz to unlock further funding from Loading Docs. It’s an all or nothing campaign running from today until March 11th. If they don’t raise the funds the documentary won’t get made.

This collection of socio-culturally relevant documentaries will also cover the desperate fight against Kauri dieback in full te reo Māori, period positivity, mental health and an MMA fighter battling for a future in the world’s bloodiest sport.

OK Chlöe – Millennial MP, Chlöe Swarbrick, challenges the establishment during the most important year of her political career.

Fight Woman – Days before the biggest fight of her career, a Kiwi MMA fighter grapples with her future.

This is Us – One year on from the fatal Christchurch Mosque attack, a young Muslim man returns to the spotlight to incite real change.

Going Home – To celebrate the adventurous life of her late Uncle, Ashley takes a leap of faith and learns to fly.

Te Wao Nui – Kauri are dying. A traditional Māori healer has one last chance to save an entire forest, one tree at a time.

Table For One – Against all odds, an ageing table tennis icon returns for her last shot at Olympic gold.

Wahine Warrior – After a brush with death, she was reborn a warrior. Hunting is her therapy. Now thousands seek to join her revolution.

About Bloody Time! – A self-deprecating 40-year-old is on a mission to find out why she still hates getting her bloody period.

Taking part in Loading Docs sees filmmakers partially funded to create their short, alongside participating in a talent development programme that challenges them to expand their skills and knowledge in story development, connecting with audiences and increasing their understanding of documentary.

The completed short documentaries will be available on www.loadingdocs.net and TVNZ OnDemand later this year.

Loading Docs is funded by NZ On Air and made with support from the New Zealand Film Commission and Te Māngai Pāho.

A devoted Christian turns her back on the church to pursue a path of sexual enlightenment and love through Tantra. Read more.

Petra Leary, a skater girl with no formal education, claims her place as one of the top aerial photographers in the world. Read more.

Watch them both here: loadingdocs.net/shorts

Loading Docs are proud to announce two of our Power collection have been selected for the 20th annual imagineNATIVE Film + Media Arts Festival, the world’s largest presenter of Indigenous screen content. The two 2019 Loading Docs selected are; Mana Wahine & He Hekenga Tūhura.

Pania Newton is one of the co-founders leading SOUL (Save Our Unique Landscape), a collective of activists who are fighting for the return of 1000-year old historical site Ihumātao. This documentary is the personal journey as Pania struggles to survive under the pressure of trying to maintain her plot of land and leading a major protest. Read more.

Watch them both here: loadingdocs.net/shorts

Have you ever wanted to make a Loading Docs documentary? Now is the time to reach out and let us know.

In advance of the full request for proposals, Loading Docs are looking for expressions of interest to participate in Loading Docs 2020. A new decade brings the new theme of ‘Revolution’. The documentaries will be between 3-8 minutes in duration and must relate to theme. You don’t need to have a documentary idea at this stage, but you must be a committed storyteller.

Please email your interest to hello@loadingdocs.net with the subject heading ‘I want to make a Loading Doc’ and tell us why you want to be involved.

Unified by the theme of power are stories that will have audiences questioning their own interpretation of power and revealing how unlikely characters can become the heroes of the story. Celebrating New Zealand perspectives on world issues, subjects include Kiwi icons William Trubridge, Pania Newton, the ‘Nek Minnit’ guy – Levi Hawken, and revered celestial navigator Sir Hector Busby.

He Hekenga Tūhura presents the extraordinary final interview with Sir Hector Busby – in te reo Māori – just weeks before his passing. Also part of the collection is My Breakup with God, about a devoted Christian who slams the door on the Church – against her parents’ hopes – and pursues a path of sexual freedom and love. Operation: RAMBU! propels audiences back to 1980s Indonesia to meet an unlikely Kiwi action hero.

One special Loading Doc hits the big apple this week with a screening of ‘East Meets East’ at Happy Family Night Market, in New York City.

HFNM is an annual event that celebrates the Asian diaspora through food, art, and education.

‘East Meets East’ explores the honest musings of a Chinese grandmother, bringing an unseen community into the spotlight.

We’re pleased to announce eight Loading Docs will be shown at this year’s Sheffield Doc/Fest, as part of The Light Cinema Free Screen. Sheffield Doc/Fest is a world-leading festival celebrating the art and business of documentary and non-fiction storytelling across all forms. Each year the festival welcomes over 25,000 festival goers, this year running June 6th to 11th.

She Speeds – In the exhilarating world of dirt track racing, female stock car driver Brooke smashes through every barrier to do what she does best.

East Meets East – The honest musings of a Chinese grandmother brings an unseen community into the spotlight.

He Kākano Ahau – From The Spaces In Between – A courageous takatāpui (Māori LGBTQI) activist is fighting for true diversity in our Gay Pride celebrations.

Ajax the Kea Conservation Dog – A passionate conservationist and his canine companion fight together to save New Zealand’s kea.

Hear Me Out – Mojo Mathers, Aotearoa’s first deaf MP, has one last chance to open the door for people with disabilities to fully participate in democracy.

Kareārea – Fern, a sassy kārearea (New Zealand falcon), worried about the future of her species, is on a mission to change her whānau’s bad reputation. (Also screening at free indoor selections; Family Shorts & Our Planet)

Want to find out more about Sheffield Doc/Fest? Click here.

The Free Screen is not ticketed and freely accessible. Will you be there watching? Let us know by tweeting us at @LoadingDocs.

He Hekenga Tūhura looks back on Sir Hek’s legacy and considers who will carry the mantle into the future. Sir Hekenukumai Puhipi (Busby) was made a Knight Companion of the New Zealand Order of Merit in February for his role in reviving Māori traditions of waka hourua (double-hulled voyaging canoes) and celestial navigation.

We are privileged to have worked with Sir Hek. He leaves an eternal legacy in Aotearoa that we at Loading Docs will both respect and cherish.