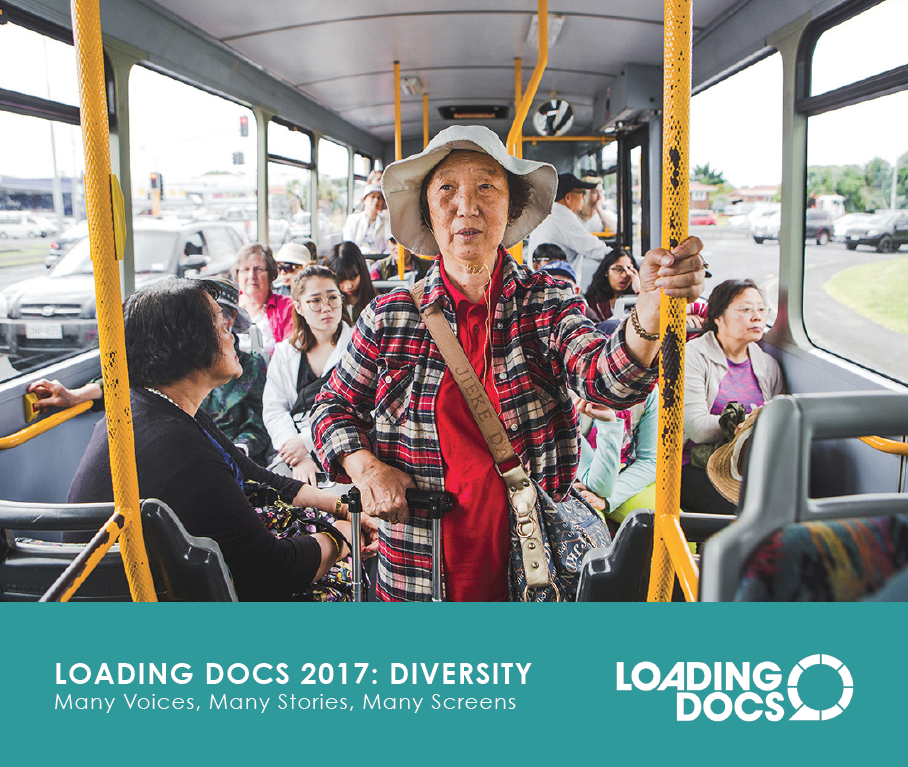 Diversity is the theme of the latest collection of ten 3-minute Loading Docs shorts, marking the fourth year of success for the documentary initiative.

Since 2014 Loading Docs has invited New Zealand documentary makers to pitch based on a common theme. Filmmakers who aspire to push creative boundaries and hone their craft are then chosen to participate in a talent development programme resulting in the creation of ten groundbreaking documentary stories.

From the beginning, we have sought out stories from all over Aotearoa, made by filmmakers from different backgrounds and levels of experience. 2017’s theme of diversity brings this aspect of Loading Docs to the forefront, celebrating the uniqueness and difference of our documentary-making talent and the stories they have to tell.

Loading Docs 2017 features stories of sex, death, love, loss, hope, friendship, culture and identity. In just three minutes, Loading Docs takes us to places we may never have imagined and invites us to see our own world in a new light.

Like all good documentaries, these short films provoke, inspire and awaken curiosity. 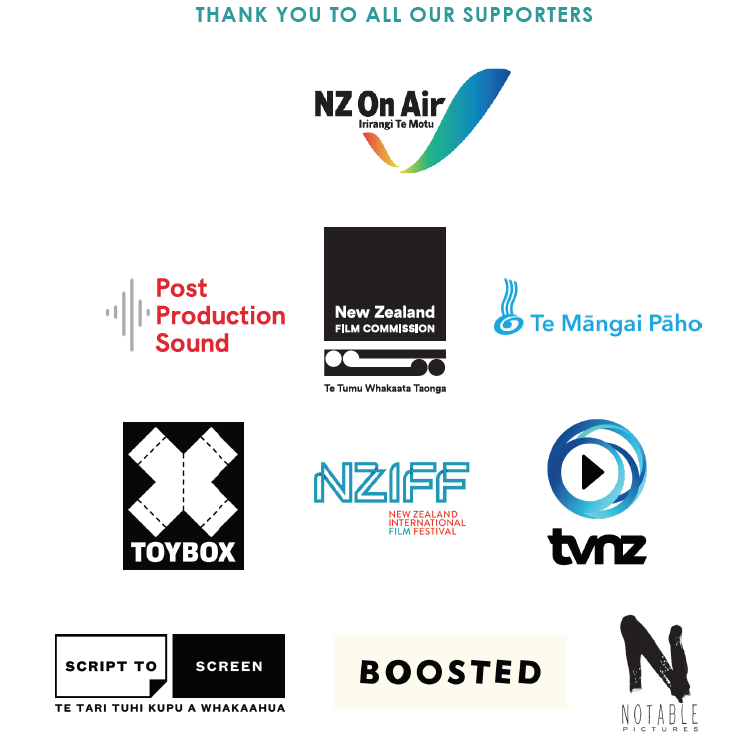 Asian Men Talk About Sex is three women’s mission; to challenge the mainstream media’s portrayal of ‘sexy’ by asking every-day Asian men in New Zealand to talk about their sex lives – the good, the bad and the ugly – in order to reclaim it. Director Chye-Ling Huang spoke to Amy Weng about the challenges involved in creating the documentary, and what she hopes the film will help us to understand.

Amy Weng: I first heard about Asian Men Talk About Sex on Facebook and I was a little stunned because it’s such a taboo subject. I’m really interested to hear what kind of conversations you were having that inspired this project and at which point did you decide, yeah, we need to do this?

Chye-Ling Huang: Everything that happens in your life is going to feed into your art making. Being a Chinese New Zealander, I’m always interested in investigating bicultural nuances, especially relationships. We had the Loading Docs initiative brought to us, and we all sat down and thought, this is the year. We’ve never been filmmakers but this is the perfect opportunity for us to learn something new and reach more people.

So we sat down and thought about what we could do. So far a lot of the work I’ve been making has been about women, or have women protagonist. James Roque is the co-founder of PAT and we were wondering what else could we do and say about Asian men. They are incredibly marginalised. On screen, there are no Asian dudes and we were like, damn, this is an actually a massive hole. We started talking about the tropes and stereotypes about Asian men and how all these stereotypes are connected by one major motivating factor which is to emasculate Asian men. How could we combat this or shed light on this?

One of the first ideas was to try and find all the Asian male celebrities in New Zealand. American screen is taking steps forward but in New Zealand, who are the Asian men on TV and film? We combed our history and found a couple of Shortland St characters: one was a gay dude, played by Peter Huang, and the other was an evil doctor, played by Mel Odedra for a few episodes. And then there’s the ‘Spray & Walk Away’ guy and a mixed race Chinese guy who does the news occasionally. And Raybon Khan – that’s it. That’s five people that we found from the entirety of our screen history. It’s just mental.

We thought we should make a documentary about an actor going through all these things. Yoson An is my friend and an Asian actor. He’s incredibly good looking and talking to him I found a lot of the work that he’s done is totally bucking the stereotype. He’s worked a lot with Flat 3, he’s a leading romantic figure in their videos.

AW: He was also in the Mooncake and the Kumara by Mei-Lin Te Puia Hansen.

CLH: Yeah, and he was in Ghost Bride where he had a white love interest and an Asia HBO drama where he was also a leading man. So he was completely bucking the stereotype but where is that on mainstream New Zealand TV? It’s a different conversation when you start talking about why this is happening and how it is affecting everyday people. How is the media using emasculating tropes as an example for our romantic lives? And how does this affect normal Asian men who only see themselves as these horrific emasculated tropes?

So we thought, let’s take the focus off this hunky actor who has his own certain privilege. The problem isn’t that we need more hunky Asian men, it’s about normalising sexuality in Asian men. So that’s how we landed on Asian Men Talk About Sex. We wanted everyday Asian dudes to be talking about sex in a normal and healthy way. We didn’t want it to be fetishised and we didn’t want it to be a BuzzFeed sensationalisation piece. We wanted it to be real. We want people to see themselves in this film and relate. We didn’t want men to aspire to be that ripped six-pack guy who made it onto that one episode of whatever as eye candy for the ladies. We wanted to see real people.

AW: I’m interested in you three women creating a documentary about men and their sexuality. Were there any particular challenges you faced as women? And how did you deal with it?

CLH: Me, and producers Kelly Gilbride and Ruby Reihana-Wilson are Chinese New Zealander, Pakeha and Māori women. Looking at our own internalised racism was challenging. Being like, yeah, I’ve never dated an Asian guy, or thinking about how we judge people of different races on Tinder. In my intellectual mind, I’m not a racist but I’ve been socially conditioned to be attracted to white people. That’s what American and New Zealand media are feeding me. It’s so yuck. That was a really interesting investigation for us. It’s so insidious.

AW: Someone told me about this OKCupid survey that found that Asian men are the least desirable group of all races and genders- second were black women.

It was an interesting endeavour because we were investigating our own racial prejudice and for me being a Chinese New Zealander I feel like I have some sort of claim to investigating stuff about Asian people. Being in that world allowed me to put myself in their shoes and investigate further so it was easy enough to relate on a cultural level, but the nuances of being male were definitely something out of my depth, which I really enjoyed hearing about in such a confronting and truthful way.

I think one of the advantages to making this doco as women because our viewers are also going to be women. The people whose minds we wanted to change are women – and men. There are a couple of non-hetero men in this film, but a lot of hetero women will be watching this.

I’m really sex positive in general which is a good place to start when talking about these issues – I directed a play called Like Sex about teenage sex in New Zealand and I’m also writing a different play about sexual racial prejudice. But we realised we were all women so we decided our crew was going to be entirely Asian men. Our DOP, cameraman and editor Calvin Sang, photographer, and art department guy Michael McCabe, camera assistant and lighting guy Sash Samaratunga and consultants Nathan Joe and James Roque are all Asian New Zealanders of different ethnicities. So we had lots of consultation. The idea was to make the space as comfortable as possible.

The idea was to make the space as comfortable as possible. Sometimes though, when things got too uncomfortable for the guys they would flick their eyes to Kelvin or Sash or Michael, which made me feel, oh, my very presence as a female in this situation is actually quite confronting. I wonder if that affected any of the outcomes on film. That was something I thought in the back of my mind. This is a pretty intense situation for these guys to be in.

CLH: Yes – that’s the beauty of the Loading Docs initiative. It’s a really great challenge and has allowed us to really hone in on what it is we are trying to say, our tone and story and aims for the doco. It’s been great to have Loading Docs support is in this way, as we are theatre-makers mainly. Three minutes is also genius because it’s so shareable, accessible and is enough to get people talking. We are making a twelve-minute director’s cut too which will allow us to go a bit deeper, so those who enjoyed the concept of this one will hopefully stick around to watch more! We shot seven hours of footage because we knew we would do an extended cut.

AW: You mentioned you talked to your dad about his sexual experiences, and you said it was awkward but it also helped you to see him as a whole human being. Did you have any other thought or reflections on that? The need to portray Asian men as whole human beings, that seems really compelling to me.

CLH: Sex is such a human experience and if you take that away from someone you are dehumanising them. If you give Asian men back that narrative I’m hoping that will humanise them again for viewers. I think having Asian men talk about sex is quite revolutionary in that sense.

When I talked about my dad and about seeing him as a whole human being, it’s on the same level as seeing them cry for the first time, or seeing them fail, or finding something that you disagree with them on. They have all these complex feeling like me and they are not this perfect person.

On a human level, on a father-daughter level, it was interesting to hear my dad talk about sex because it opened things up like, fuck, he’s lived such a life and he’s such a complex person. He’s such a strong, wise, guiding figure in my life. Hearing my dad talk about his experiences and him having to unlearn and relearn what sex was, things just fell into place.

My dad talked a lot to me about his failed marriage but getting down to the why and how he got there and how things in his youth greatly impacted on his future, it makes so much sense and it is such a human thing to repeat what you have learnt and to hold onto problematic lessons that are ingrained in you as a child.

It all becomes understandable and forgivable. It’s just humanising. I can understand him and that’s what the aim of this documentary is. For people to understand and find a connection with these guys who are just regular looking guys who have sex. They’ve had fun doing it and they’ve had awkward times and we can all relate to that.

END_OF_DOCUMENT_TOKEN_TO_BE_REPLACED

A new documentary film called East Meets East has been released looking into the difficulties elderly Chinese migrants are facing trying to settle into NZ. The suggestion is that it’s not all that easy for the struggling migrants and that the perception is the migrants are a drain on society.

Listen to the interview HERE